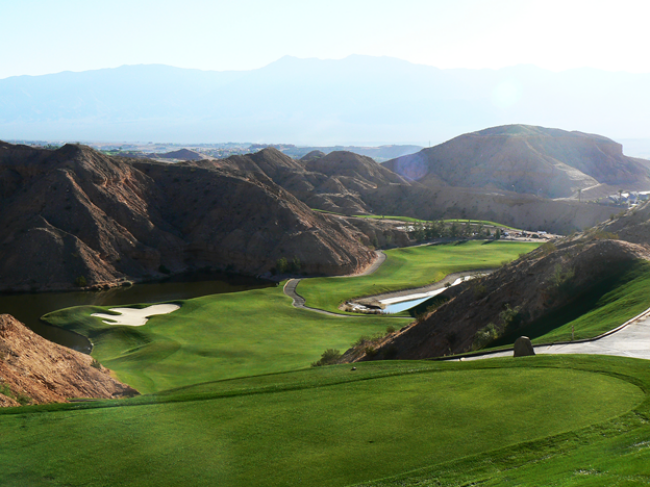 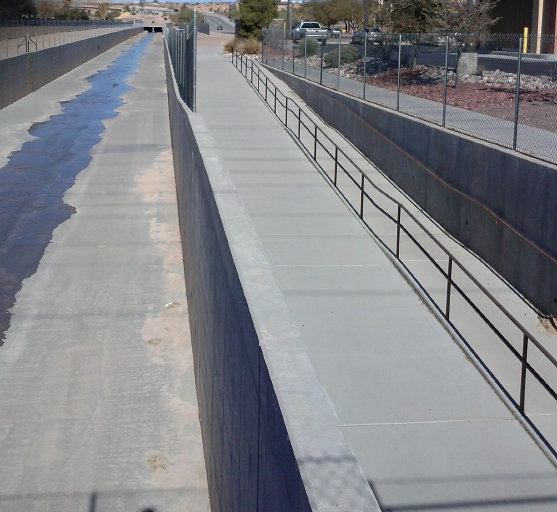 Channel improvements were designed for an existing wash to convey storm runoff. This 1.2 mile, $6,200,000 project was funded by the City of Mesquite and the Clark County Nevada Regional Flood Control District.

Included in the engineering tasks were hydrologic/hydraulic modeling, and structural design of the channel lining and box culverts. Bulloch Brothers worked with the City of Mesquite, Clark County and Nevada State officials to address environmental issues, utility conflicts and aesthetic concerns. 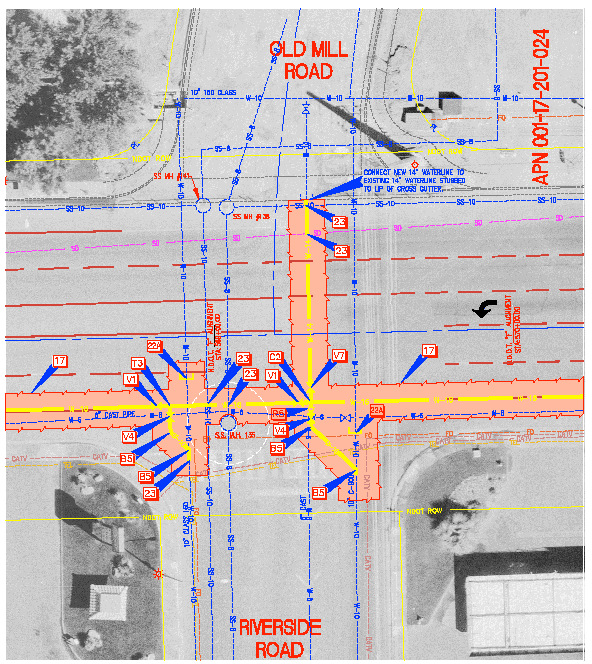 Mesquite and Sandhill Boulevards are the main arterial streets that run through the center of the city of Mesquite. These roads are typically very busy. Being located in the downtown district, there is a cross road at nearly every block.

The water system in the downtown district is a grid that follows the street layout. This project replaced existing small diameter water lines in Mesquite and Sandhill Blvd., that were no longer adequate, with a large diameter 16-inch line. The plans detailed complicated tie-in connections to existing water lines at each intersection, and detailed service connections for businesses and residences alike.

At that time, Mesquite Blvd. was an NDOT Right-of-Way; an NDOT encroachment permit was required and obtained. In that the roadways had existed for many years, the contractor had many unexpected underground conflicts that due diligence planning and design work had missed due to lack of records. The existing water lines were removed or abandoned as necessary. 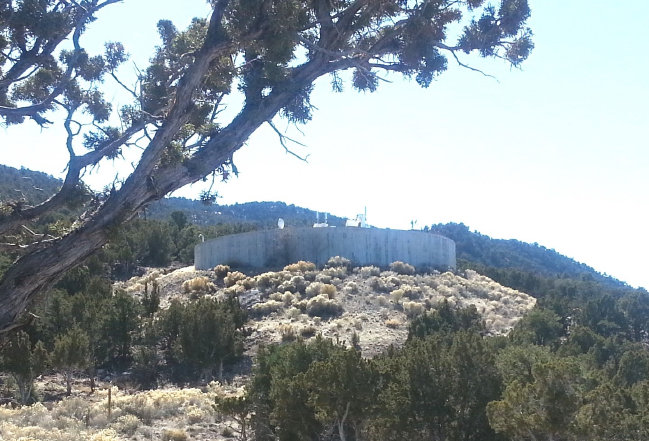 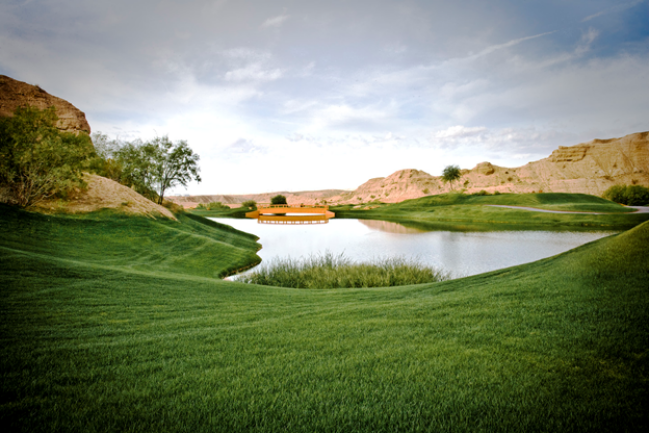 Completed in 2000, Wolf Creek is considered to be one of the top championship courses in the world. Wolf Creek was named by the Wall Street Journal-Europe as one of the top 10 Fabulous Golf Courses in the world. Bulloch Brothers surveyed and supervised the extensive grading and drainage that was required to make Wolf Creek the success it is today. Bulloch Brothers also was responsible for the permitting, design and planning of the surrounding rental condominium residential complex adjoining the course. 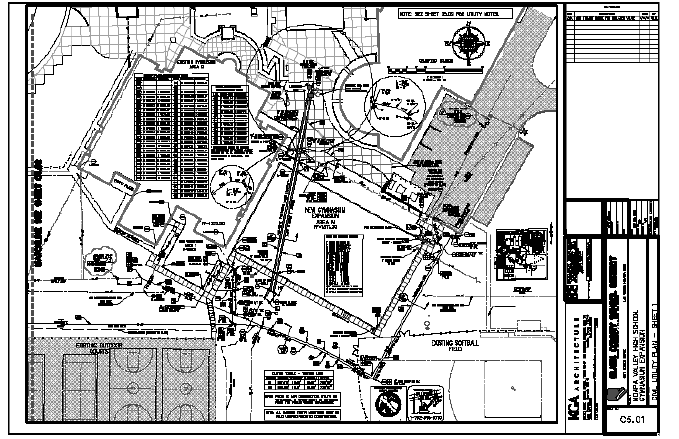 This was a joint project that incorporated several engineering disciplines, an architect, and the School District. We completed the Civil design portion of the work which included survey work, horizontal control, demolition, site grading, utilities, an encroachment permit and prepared a variance request for fire flow criteria that was submitted to the State Fire Marshal.

The Gym expansion required that an additional 8” fire line be installed from the water main in St. Joseph St. to the new gym location. We completed a water model to demonstrate the existing water system surrounding and within high school property; plus the new fire line was capable of providing the required flow. Bulloch Brothers coordinated design work with the Moapa Valley Water District who reviewed the plans and model for conformance to their criteria. 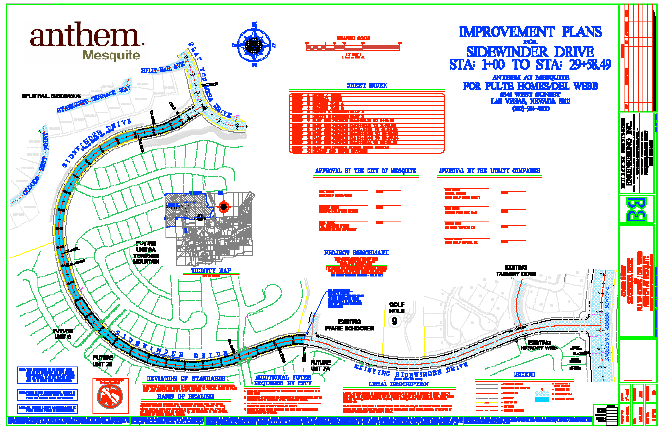 A roadway design for a local collector street located within the Sun City (Pulte) development. Design work included approximately ½ mile of water line improvements along with stubs for future developments, valves, and other pertinent details related to water improvements.

The Improvement Plans went through the plan check procedure required by the City, and were also reviewed by the Water District. Design work also included grading, other utilities, surface improvements, and a Technical Drainage Study. This portion of Sidewinder Dr. will serve four adjacent residential subdivisions. 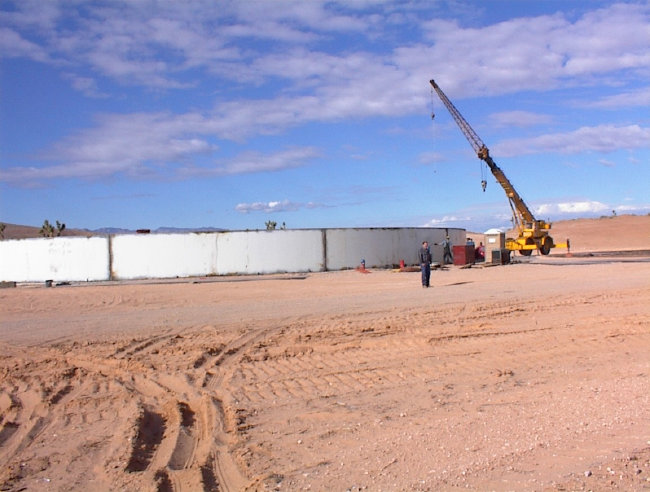 Completed for the Virgin Valley Water District was an access road and water line from Well #33 to the Mesquite Heights Tanks. Well #33 is located to the east and north of the city landfill.

The Access road and water line alignment ran west along the north border of the landfill, and to the northwest up the hill to the Mesquite Heights Water Tanks. The project was a part of a series of similar projects that connected Well #33 and the tanks to the water system in Mesquite.

One of Arnold Palmer’s favorite courses, the Arnold Palmer Golf Course at the Oasis Golf Club is described in Golf Digest as “One of the top 10 you can play”. It, together with the Canyons Course, form 36 holes of challenging championship golf.

Working closely from the beginning with the owners, Bulloch Brothers was responsible for providing the survey, grading, staking and drainage for both courses together with the site preparation and utility design for the Oasis clubhouse and surrounding residential subdivisions.

Constructed over a period of years, completing the rough and finish grading design as well as the drainage on both courses, represented a challenge that was met by Bulloch Brothers together with the contractor and golf course architect. 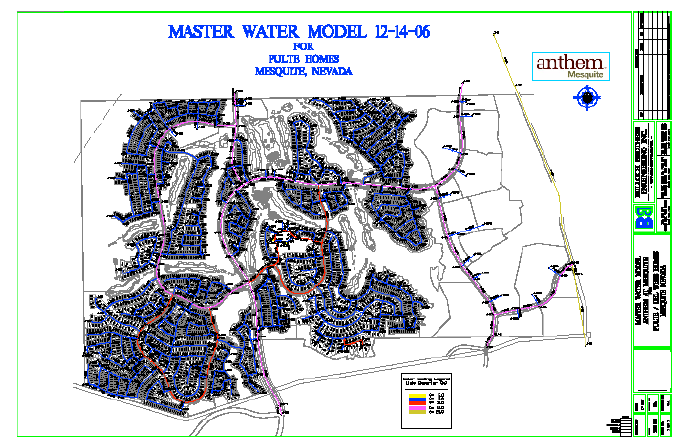 Sun City Mesquite is a large active adult community developed by Pulte Homes. Current planning for this community estimate the full build out number of lots to be 4,644. To date several subdivisions have been completed with an existing lot count of about 1,255.

A Master Water Model was completed for the overall system in 2006 by Bulloch Brothers Engineering, Inc. This model established the pressure required to serve the Sun City area when fully developed. In 2009 an Interim Condition Water Model was completed by Bulloch Brothers to determine an interim pressure that would provide equivalent service for partial improvements.

Bulloch Brothers is currently updating the Master Water Model for the overall condition to incorporate updated layouts into the model and study the effects on the water system. The water model incorporates over 1,200 elements (pipes + nodes); and is a steady state analysis that considers Maximum Day Flow + Fire Flow. When completed, model results will be submitted to the Water District for review and approval in accordance with their criteria.